From Rod to Mouth – How DESS® Abutments Are Made

Our story starts far back when we began producing small precision metal parts back in the 50s in a small shop in the middle of Barcelona. Over the years the company adapted to the times and in 2007, the first timid outsourced production in dental took place.

Then in 2009, we registered the brand “DESS® Dental Smart Solutions” and the rest, well, is history.

Let’s have a look now at the machines that make our compatible abutments and even dental implants. I think is worth explaining the core of the process that takes place using turning machines, or lathes. This of course applies to any other dental implant and prosthetic manufacturer.

So, what is a turning machine? Well, the principle is very basic. A lathe is a turning support (spindle) that spins whatever material (clay, metal, wood) it holds while a tool, or even human fingers if we’re using clay, remove material until you get the final shape of the part. 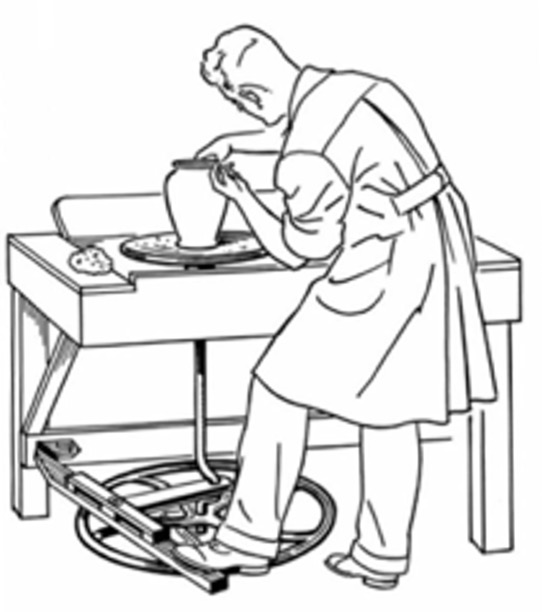 Perhaps the very first lathes were used to give shape to clay to obtain pots. Then someone probably attached to the spinning table something stronger than a human foot-and-leg. After that, the first wooden parts could be made, for instance.

Let’s now jump forward in time to when lathes that were used to work with metal were powered by steam and belts like the picture below shows: 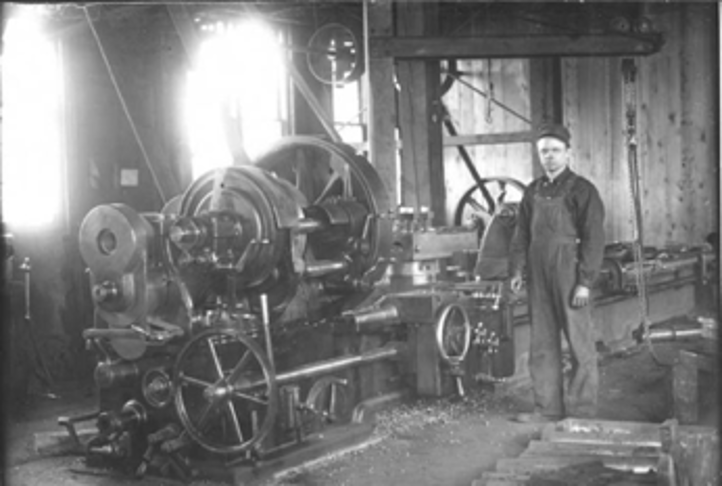 As soon as electricity came along, lathes adopted this source of power and the parts could be moved by electrical motors while the operator was, with the help of wheels, pinching the turning part with the tool. Parts could be produced much quicker like this. 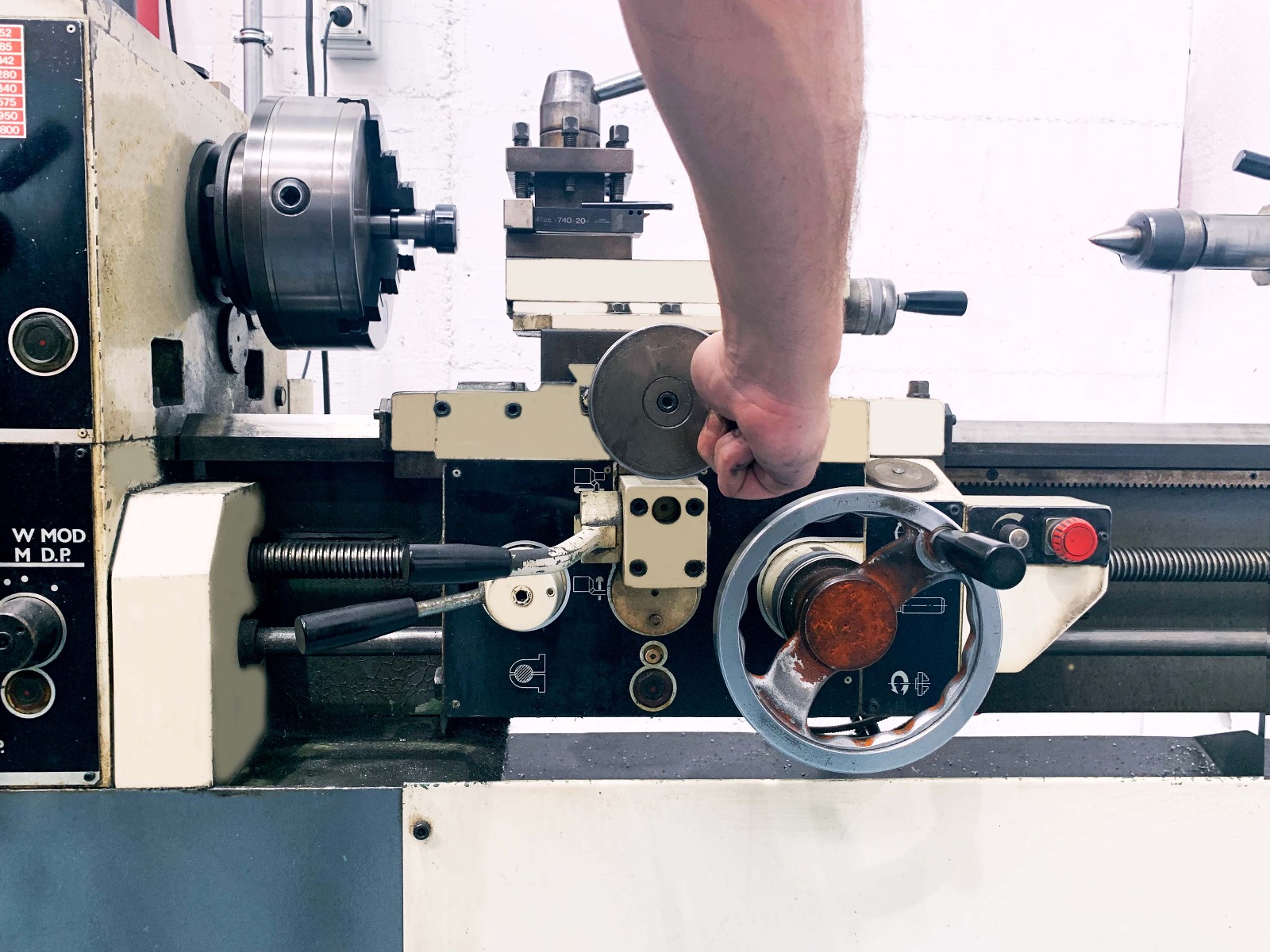 Then let me hurry to the ones I want to talk about: the “Swiss” turning machines, so named because of their country of origin. Those have a particularity – the spindle that grabs the rod through it can move back and forth and not only spin. That allows it to give shape to long, narrow parts without losing precision. These machines are perfect for making dental implants or any long abutment, like an analog.

However, the first ones appeared long before computers. They were automated by a shaft and cams that pushed the tools as cams push the valves of a car engine. If you’d like to see how these “old ladies” move, you can find many videos on YouTube. I’ve copied a few links here for you. But don’t panic! Ours are newer than those and the factory looks quite different too!

Once CNC (Computerized Numeric Control) arrived on the scene, the cams were substituted by electrical actuators or motors, making changing between programs a kid’s game compared to in the past where each cam had to be profiled to obtain the movement of each tool at the right moment. This was an art that my grandfather, father, and even my brothers learned and applied.

The first CNC machines back in the 70s had to be programmed with perforated cards. In the 80s that was replaced by more capable computers that could be programmed either onsite, in front of the machine screen, or through RS232 serial connections from any computer.

We bought the first one back in 1990 or so and it was a turning point, never better said, for the fate of the company as in 10 years all our machines were CNC and we got rid of all the old ones.

The first one we bought was a top-notch Japanese Okuma® LB15 that even had a color screen! What more could we ask for? That machine was solid and reliable like nothing else. It confirmed one of our beliefs that we have applied always: don’t skimp on production means. Ever since then, we have always acquired the very best to produce whatever we do.

Now is the time to talk about companies that rule the world of the machines that produce dental implants and their abutments. Everyone knows the main implant brands – Nobel Biocare®, Straumann®, Zimmer Biomet®, Astra Tech®, and so on. Just as everyone who produces knows that there are only a handful of machine brands to use. Let’s know them a little bit.

This company is probably the daddy of all the machine-tool manufacturers and it is still in Switzerland. It is not the biggest one but has maintained its strong reputation throughout the years. If you want more information click here.

Tornos was founded in 1914 is now probably the smallest one among the “big four”. It has more than 700 employees and a clear global footprint. Tornos is a company that, thanks to its tradition combined with innovation, deserves its prestige.

They are one of the very few remaining producers of multi-spindle turning machines that can handle up to 5 rods at a time. These are not so suitable for dental work but are ideal for huge lots for the automotive or electronics industries.

Tsugami is a company that began in 1923 close to Tokyo. It now has more than 2800 employees and has factories in Japan and China. Their machines are especially known to us for their extreme reliability. They’re bulletproof and as robust as tanks! Go to their website.

My view is that they perhaps are not so innovative or productive as Tornos or Citizen, but their machines are stable and almost maintenance-free. This is paramount and gives the greatest peace of mind to the producer. And that is gold.

This is the second of three Japanese manufacturers. They began, by happy coincidence, the same year our grandfather started his company. However, Star has become a bit… bigger, as they have now over 1.500 employees worldwide!

The funny thing about them is that they still produce printers which were probably a big business years ago, and now is a niche but still interesting business for them. They make small, specialized printers for retail businesses. For more information click here.

The last but with more than 2000 employees in total, certainly not the smallest! They were founded in 1930 for watchmaking and started making their own tools in 1936 and CNC machines back in the 1970s. Once they acquired another extremely reputable company – Miyano, in 2010 – Citizen Miyano became what they are today.

To me, their leadership in bush-free technology for the tools’ movement is remarkable. They use linear magnetic motors that achieve unbelievable speeds and feedback on position. They are probably now, together with Tornos, the two brands of reference for watchmaking.

Now you know what a lathe is! It’s the machine behind any dental implant and abutment. You also know now who in this industry is. In the next post, I will tell you what machines we have.

I didn’t create this post to be a technical paper, just to share a little about my experiences in this industry since I have played among these machines since I was 10. I hope you have enjoyed it and learned a bit from this short reading.

Roger Terrats is our C.E.O at DESS Dental (Terrats Medical). He has more than 10 years of experience in the dental sector as Sales Manager, Project Manager and Technological Development.